There was a time before Gameboy when the novelty of a “handheld” game was so alluring that tykes were willing to accept less-than-stellar electronic offerings. LCD video game technology had its uses, after all. Depending on pre-formed darkened shapes, any game that involved simple projectiles hitting targets was a reasonable way to kill an hour if there was nothing good on TV. But there’s only so much fun to be had playing electronic bowling, and thus the technology was pushed beyond its usefulness, adapted to mimic fluid, pixel-based consoles to the point of embarrassment in the name of cashing in on popular entertainment licenses. Today these handhelds serve as a kind of video game bottom-feeder, collecting dust at garage sales in penance for crushing hopes and deflating expectations across gamedom. It’s a fitting punishment, for the following games aren’t merely bad; the fact that Tiger converted intellectual property gold into solid game crap is a genuine alchemical outrage.

Violence isn’t an acceptable way to handle conflict in real life, but it’s all well and good in the escapist world of video games. Fulfilling power fantasies by crushing monsters is a debatably healthy way to channel feelings of frustration into harmless fun. The problem is, like most all Tiger handheld games, the gameplay in Mighty Morphin Power Rangers is so cumbersome that the children who experienced it probably chose to unleash their rage in a less constructive, more painful fashion. All those smashed mailboxes around the neighborhood? That’s not youthful mischief. That’s a young ranger’s cry for help.

Remember how suspenseful it was to watch Jurassic Park for the first time? The earth-shaking approach of the monstrous T-Rex? Those damn velociraptors opening doors? The acid-spitting dilophosaurus wrecking Wayne Knight’s complexion? This game echoes some of those events minus the tension that made them meaningful, so hopefully everyone is down for a joyless thirty minutes of running and hiding, followed by the crushing disappointment at having done so. Really, would it have killed Tiger to include some dino-destroyage (like in the far superior JP games on Sega Geneis and Super Nintendo)?

Challenging players to master “five levels of skill,” the Batman Returns game’s only notable trait (other than being terrible) is that it cashed in on what was perhaps the last movie anyone saw with Michael Keeton in it. That is all.


Games based on musicals feel empty without at least some of the source materials’ jazzy tunes to bolster the action. Take Disney’s Aladdin. Without his tortured musings, Agrabah’s lovable pickpocket is just another thief lying to get under a princess’ veil. Furthermore, it’s ghastly to consider a loveless romp on a magic carpet sans “A Whole New World” to explain Aladdin and Jasmine’s mutual affection. It may seem obvious in retrospect, but it takes the Prince of Thieves himself to prove that Tiger’s handheld games fail not only at graphics and gameplay, but also at music. What’s worse than G.I. Joe’s desperate Star Brigade line? Easy. A videogame of G.I. Joe’s Star Brigade. For one, all of the guns on G.I. Joe: A Real American Hero shot lasers in the first place. Secondly, Joe‘s colorful cast all but loses its personality when adorned in bulky space suits. Finally, since sound cannot exist in the vacuum of space, Snake Eye’s trademark silence is completely spoiled when nobody can hear a thing in the first place. All kidding aside, the Star Brigade toyline was pretty cool. Unfortunately, none of the fun translated into this atrocious 2-D buzzkill.

This game is the epitome of wrong. How many children were crushed on birthdays when, after asking for the NES version of Mega Man 3, unwrapped this dubious imitation? Furthermore, how many well-meaning grandparents are currently rotting in third-rate retirement homes because of the resentment such gifts fostered? Try not to think too much about it. The sad truth is like an iron-buster to the heart. 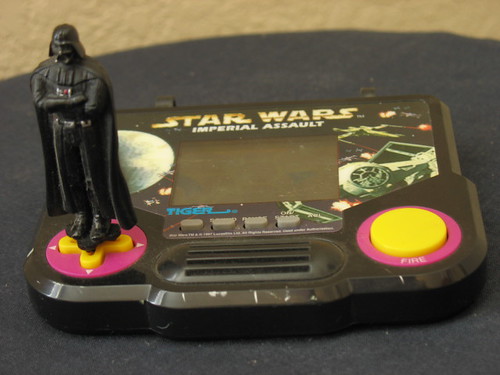 Like few other games on this list, this handheld Star Wars game has the benefit of a cool-looking exterior, which stands in stark contrast to its dilapidated gameplay. The Darth Vader joystick figure strikes a pretty mean pose – nearly a B-Boy stance. It’s not nearly enough to make up for the game’s inherent awfulness, but it keeps it from being higher on the list.

What happens when a gaming technology notorious for its glacial pace attempts to keep up with a game franchise built upon speed? A Tiger drops yet another turd. This stinker defies all logic, making Sonic a sluggish and clunky nightmare instead of a streamlined adrenaline rush. To make matters worse, this game was released after the Sega Game Gear, making the title’s “fun on the run” ad campaign demeaning and offensive. Everybody knows that playing videogames is the alternative to healthy physical activity. Pshaw Tiger! Pshaw and poppycock! 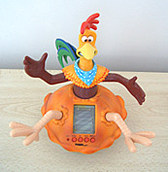 
It’s one thing to try to adapt a video game to a small screen, another still to dumb down a property to fit the confines of lower technology, but this game is a slap in the face to all that is Super Street Fighter II. It’s like Tiger didn’t even try to hide its imitation of one of Capcom’s greatest hits. At least with some of the other games on the list, gameplay was modified from the source material to hide Tiger’s gross imperfections. Here the staggering awfulness whirls full-tilt, almost daring players to take it in. Tiger’s electronic handheld games must have been some kind of secret government experiment to test the concept of gestalt and the limits of the human mind. That’s the only way to explain how a hallmark fighting game could be reduced to a series of awkward shapes flashing sporadically via button-mashing.

Robert Bricken is one of the original co-founders of the site formerly known as Topless Robot, and its first editor-in-chief, serving from 2008-12. He brought the site to prominence with “nerd news, humor and self-loathing” as its motto, raising it from total internet obscurity to a readership in the millions, with help from his savage “FAQ” movie reviews and Fan Fiction Fridays. Under his tenure Topless Robot was covered by Gawker, Wired, Defamer, New York magazine, ABC News, and others, and his articles have been praised by Roger Ebert, Avengers actor Clark Gregg, comedian and The Daily Show correspondent John Hodgman, the stars of Mystery Science Theater 3000 and Rifftrax, and others. He is currently the managing editor of io9.com. Despite decades as both an amateur and professional nerd, he continues to be completely unprepared for either the zombie apocalypse or the robot uprising.